The parasociological hypothesis in a nutshell

Here is a short post where I am trying to summarize my efforts to make sense of what parasociology is all about.

I am also taking a break for the month of July, and I wish everyone a good and safe summer.

Parasociology is mostly about studying and understanding the sociological dimension of anomalous phenomenon, by integrating the concept of psi within its core analysis. Hence, it is starting from the key findings of parapsychology, but aims at extending them outside the realm of individual psychology. Below is a short description of the parasociological hypothesis.

At the individual level, parapsychologists who have studied spontaneous paranormal cases tend to think that there are mutual interactions between the subject (experiencer) and the phenomenon. For instance, in the case of poltergeists (RSPK), people are seriously impacted by the disturbances and oftentimes ascribe the phenomenon to an “evil spirit” or some sort of non-human entity. Yet, it is pretty clear that the main person around whom the phenomenon is occurring is influencing its nature, namely his/her deeply buried anger and frustration appear to be what gives the phenomenon its violent character. It can be graphically represented as follow:

At the social level, sociologists who have studied controversies, which includes paranormal claims, have found that such events put in motion a social dynamics where the meaning attached to the phenomenon is debated, and usually determined by the social and political status of the key actors involved, and by the existing social and cultural pre-dispositions. For instance, the case of cold fusion was determined by the scientific establishment as a hoax, while in fact there was something like cold fusion going on, but at a very low level. In the paranormal world, the children who saw the “lady” in Fatima did not know what to think of it at first. But through various social dynamics involving a debate between the Church and the republican lay authorities, it was deemed to be the Virgin Mary who appeared to the children. Hence, the phenomenon impacted social dynamics already occurring in the Portuguese society of 1917.

The question is whether there is a parallel to be made with the individual level, where society would also influence the shape of the phenomenon, so that the interaction is also mutual at the sociological level? For instance, during the 1896-97 airship wave in United States (and Canada), the phenomenon was first described as strange lights in the sky, but it was reported by the press, nationwide, as “airships”. Could the social expectations to see an airship in the sky influenced the phenomenon so that it took an airship shape in the days and months that ensued? This question illustrates the core of the parasociological hypothesis. Graphically, it looks like this:

If one accepts that the parasociological hypothesis is a valid field of inquiry, then one should also look into the possibility of mutual interactions between the individual and sociological levels. Some of those interactions, in fact, have been studied already. For instance, the individual-level reactions to a poltergeist outbreak can create social debates in a society about what is the “true” nature of paranormal events. Conversely, if in a particular society some views about the paranormal are already accepted, then it is likely to impact the individual reactions. The clear case is the one of Marian apparitions, which tend to occur among Catholic communities. Strange and bizarre events, which meaning is not that clear to the witnesses, will eventually become interpreted as Marian apparitions because of strong cultural views about such apparitions.

Another set of interactions that should be investigated out of the parasociological hypothesis is the possible mutual interactions between the individual and social layers of a phenomenon. For instance, how an individual UFO close encounter relates to an overall UFO wave occurring at the same time? Or, how a set of Marian apparitions to a few children relate to a series of anomalous lights and healing in the community around? How a particular haunting relates to an overall high rate of hauntings in a particular region (England and Scotland)? These challenging questions have received little attention so far by researchers interested in the paranormal. Graphically, this can be represented as follow, with the dotted lines showing relationships requiring some serious conceptualisation and empirical research: 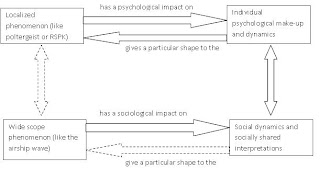 It is also possible to think of other mutual interactions. For instance, can the particular shape an individual-level anomalous phenomenon have a direct impact on the social dynamics about the interpretation of an anomalous phenomenon ? Landmark cases like the Barney and Bettey Hill UFO abduction incident clearly had an impact on how UFO abductions are construed socially later on. But what about the interaction in the other direction? For instance, could the extra-terrestrial “flavour” and shape of a close encounter be determined by socially shared views about extra-terrestrial visitations and not by the individual psychological make-up and dynamics of the experiencer? This question is at the center of the debate between the French Bertrand Méheust and François Favre about whether we have UFO witnesses of a relatively objective (i.e. of a social origin) parapsychological phenomenon or do we have only “psi subjects” living and influencing directly the phenomenon’s shape. There is very limited research on this issue.

The last set of mutual interactions, between a social-scale phenomenon and individual psychological make-up and dynamics, is also split in terms of research. The impact of those large phenomena on individuals has been studied by people like Jacques Vallée in his seminal book Messengers of Deception. UFO wave can have an impact on UFO-related cults and their capacity to recruit new members. Similarly, Marian apparitions led oftentimes to create religious fervour among people who had little interest in religion before the events. If the relationship is taken in the other direction, could it be possible that the individual psychological make-up and dynamics of some individuals have a defining impact on the shape of a social-scale anomalous phenomenon? For instance, in one of my researches on the Canadian UFO wave of 1966-67, there are some indications that the phenomenon was “responding” to a major politician’s series of key decisions, which were to have a very significant impact on the Canadian society but could not have been known at the time the phenomeon was unfolding. This is another area requiring much more investigation.

The overall parasociological hypothesis creates a relatively specific research programme, enough to keep many people busy for a long time. Graphically, it can be represented by all the dotted arrows shown below: 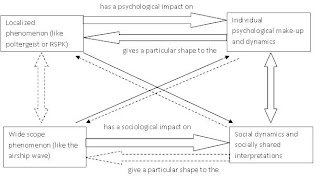