The raw data is provided here. Please note there will be a part 3 to this case study. 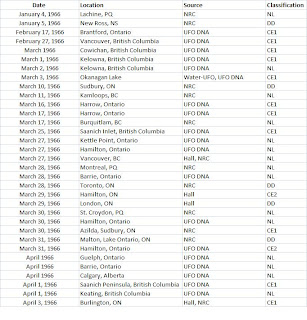 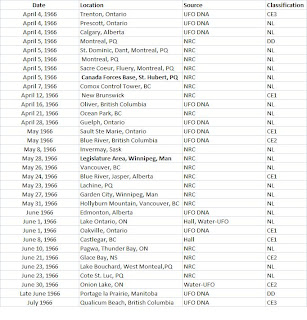 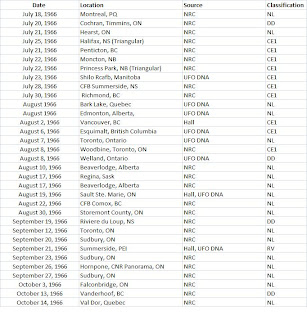 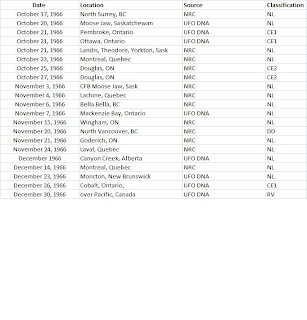 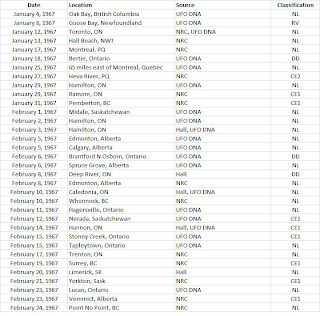 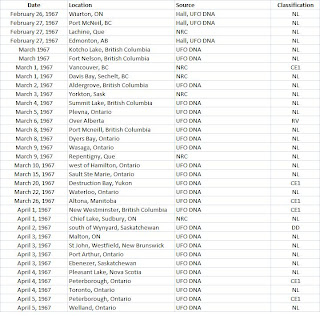 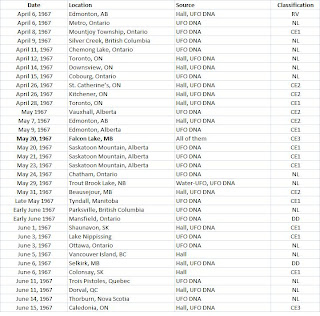 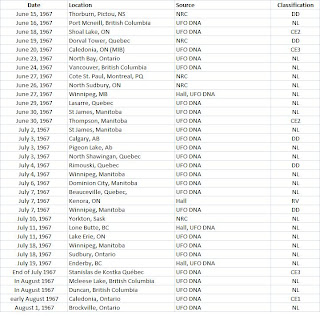 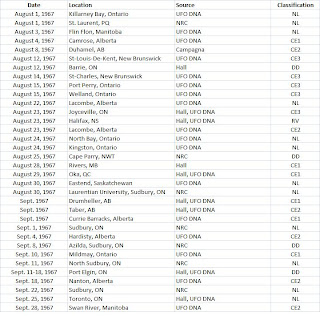 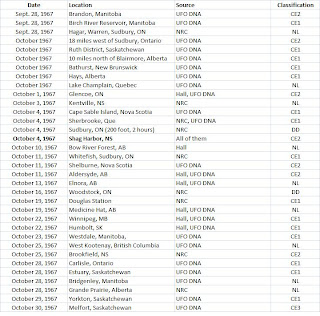 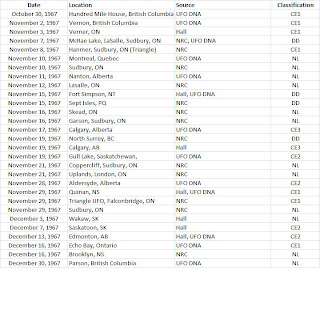 This post provides the data found about the UFO wave, and a general discussion about the preliminary findings. The layered analysis, strictly speaking, will be provided in the next post.

Although a number of ufologists have hailed the 1966-1967 UFO wave as the “mother of all UFO waves”[1], and some had their ufological career launched in its wake[2], very few comprehensive study of this wave has been produced. As far as I can see, there is no comprehensive data on the Canadian portion of this wave. Hence, the first challenge is to establish a comprehensive data set to have empirical material about the wave. There are a few books on UFOs in Canada[3], which emphasize a few selected cases. As well, there are many websites that provide information of various cases.

This is not surprising as it reflects the fragmentation of the private observation system discussed in the previous post. However, there are a few more comprehensive databases available, which only partly overlap. The data set for this case study was therefore produced by combining together those databases. Given the fragmentation of the private observation system, it is likely that the database I produced is not complete, but I am fairly confident that it represents over 90% of the reported cases in Canada for the period between 1 January 1966 and 31 December 1967. The databases used were Richard Hall’s study of the 1966-67 wave[4], the Government of Canada Archives[5], the websites UFO DNA (at ufodna.com), and Water-UFO (at waterufo.net). The choice of these databases was based on their apparent comprehensiveness, the identification of sources, and how systematic the data were coded. About a dozen sightings were not included, as they were explainable by conventional means, or there was not enough information to make any judgement.

As it is the case for the vast majority of UFO sighting reports, there is very little information to work with. The impact on the primary observation systems (i.e., the witnesses) is rarely recorded unless there are physiological effects or very ostentatious psychological impacts. As well, the potential impact of the observation system on the observed system is never looked into. Given that most of the data were recorded in the 1960s, this situation is not surprising as Keel and Vallée’s ideas about the centrality of the witnesses were only barely emerging at the time. Although, even today’s report are rarely prepared in the spirit of Keel and Vallée’s advice about the centrality of the witnesses’ personal history. Given these circumstances, it is impossible to assess a potential psi effect for every single case except for the few cases that were investigated in greater depth (like the Falcon Lake incident). This is a basic limitation found in the vast majority of the ufological material. However, basic statistical trends may be useful to assess if something is occurring at the higher level observation systems, i.e., the private and public systems.

Another issue to keep in mind is whether the sightings could be explained through conventional means or not. The problem is the same as for identifying psi effects. There are too little information available, and not enough resources to investigate. Using the findings of the project Blue Book, it became a rule of thumb in ufology to expect that 95% of sightings are caused by conventional causes. This assumption has never been really tested afterward because the private observation systems cannot afford to do so, as they are relying essentially on volunteers. This rule of thumb might be true if one does a longitudinal analysis over many years, but it appears to be less true when applied to a narrower set of data.

This is a first general finding of this case study: the 1966-67 UFO wave in Canada is likely to have a much greater percentage of “unexplained” cases compared to the total number of sightings. It is to be noted that Hynek had the same observation about the 1952 wave (242 unexplained for about 400 sightings or about 60% unexplained[6]). In other words, a key characteristic of a UFO wave is not only having more sightings, but also having a greater percentage of “unexplained” cases. In other words, a UFO wave is not only quantitatively different but also qualitatively distinct from a “normal” year. In the case of the Canadian portion of the 1966-67 UFO wave, this can be noted by the relatively high number of cases that can be qualified as “close encounters”, according to Hynek’s classification system. Although some close encounters can probably be explained by conventional means, given that they imply a much closer look, or physical evidence, or high strangeness, it is reasonable to expect greater fidelity. The Canadian data is as follow:


Close encounters constitute nearly 36% of all cases. Even with a very conservative estimate that only one in three would be truly “unexplained”, it would still be about 12% “unexplained”, or over two times more than the 5% “unexplained” of the rule of thumb. However, even if all 36% would be “unexplained,” it is still almost half of the 1952 UFO wave rate. This is consistent with the notion that the 1966-67 wave was less ostentatious than the one of 1952, even if the overall number sightings across the world was much higher.

In the light of this finding, particular attention was paid to the closer encounters. This in turn led to the identification of 6 particular clusters of sightings that will be the focus of the layered analysis. These clusters are:

(a) Concentration of nearly half (15 out of 38) of the close encounters over the early summer of 1966 (between 1 June and 8 August), with a concentration in the last week of July. It is important to note that both the public and private observation systems were on it, but only the public system caught the end of July concentration.

(b) The Hamilton/Caledonia area in Ontario experienced a mini wave of its own in January and February 1967, with a short but intense second outburst in June 1967 (including a prominent CE3 experience, and one of the rare Canadian “men-in-black” reports). This was essentially noted by the private observation systems.

(c) The Sudbury area experienced also a mini wave between September and November 1967, with an interesting sighting on October 4th, the day of the Shag Harbour incident. It is important to note that only the public observation system seemed to be aware of this mini wave.

(d) At the end of July and August 1967, there was a concentration of CE3 experiences (6 out of 13), or almost half of all CE3 reports for the entire UFO wave. In this case, only the private observation system was potentially aware, although this should be expected as CE3 cases were implicitly outside the mandate of the NRC (National Research Council).

(e) The Shag Harbour incident is also noteworthy because of the simultaneous high quality sightings in Sudbury and in Quebec, as well as a very interesting case from the Nova Scotia sharing many similarities with a RSPK event. In this case both the public and private observation systems were on the lookout.

(f) The famous Falcon Lake incident of 20 May 1967 appears to be geographically an isolated incident. But a closer look reveals that it is located within a cluster of 12 close encounters between late April and late May 1967 (or about 10% of all close encounters for the entire wave). This cluster was essentially observed by the private system.

Given the technical limitations of blog websites, the raw data summary tables will be provided in a separate post.

[1] Expression used by Richard Hall, and echoed by the Karl T. Pflock in a book review in the Journal of Scientific Exploration http://www.scientificexploration.org/journal/reviews/reviews_18_4_pflock_2.pdf

[5] Accessible online at http://www.collectionscanada.gc.ca/ufo. Also the website Canadian X-Files at http://ufo-joe.tripod.com provides a useful index to search the government database.