This post continues the analysis of the qualitative dimension of El-Zeitoun events of 1968-1971.


The Clouds and Smell of Incense
The New York Times article of 5 May 1968, one of the few mainstream newspaper outside Egypt publishing on the events, noted that “on three other recent occasions the apparition was seen and each time was preceded by the appearance of shining white clouds shaped like doves” [1]. This short comment is instructive, as it shows that the “light birds” were also understood as being clouds by some witnesses. But there was another phenomenon involving clouds where the entire sky above the church was covered with clouds, and it was also accompanied by a smell of incense.
Palmer reported that "one should, perhaps, include as 'lights' the mysterious clouds that are sometimes seen to hover high above the church even when the rest of the sky is cloudless. On one night, Bishop Gregorius stated, there poured from the sealed stained-glass windows of the high dome, such clouds of incense that it would take 'millions' of censers to produce a like quantity. The incense cloud settled over the throng standing around the church" [2]. Bayless adds a few more details in noting that “he [Bishop Gregorius] describes the appearance of clouds of deep reddish incense which billowed in huge quantities. It rose to a height of 30 to 60 feet and was clearly visible above and around the church against a colorless sky” [3].
Zaki described that “sometimes clouds like a thick fog would roll in towards the church as if they were being channeled down the streets in all directions to completely cover the church. They seemed to absorb the incense and its fragrance and carry it to the crowd of people and spread it over them like a canopy… The sky above would turn to a deep reddish-purple…” [4]. She also added that this it was a pleasant fragrance [5].
Michel Nil interviewed Father Boutros, the parish priest of Zeitoun, in 1978. He noted that there was at various occasions clouds accompanied with thunder and a smell of incense [6]. Finally, in an interview in 1980, a witness (Mona Mikhael) told Bayless that “other times we used to see clouds of incense. First, you would see a type of white cloud and it would cover all the church, all the area surrounding the church from above. […] I never smelled anything like it in all my life. It was a very, very beautiful odor. The cloud remained for 10 or 15 minutes and disappeared” [7]. 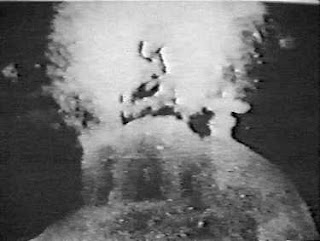 This unusual phenomenon remains difficult to explain, but it is not unprecedented. For instance, during the 1906 earthquake of Valparaiso in Chile, “other spectators saw red-violet patches in the sky during the earthquake” [8], which can be linked to the “violet low-level oscillation of air molecules or the emission of ignited gases from fissures in the ground during earthquakes” [9]. Such events seem also to have common characteristics with what has been termed “electrochemical glow discharge”. As Devereux mentioned in his research on earthlights and seismic activity, “through various electrochemical reactions the expulsion of considerable amounts of gas into the air (bubbling through groundwater or out of fissure in the ground) accompanied by pungent chlorine or sulphurous smells could be caused. Such smells have been noted by witnesses involved with earthquakes, ball lightning and UFOs” [10]. (For specific examples, please see UFO Evidence).
We have here another indication that seismic activity might have contributed to the overall events at Zeitoun. The production of large quantities of gas, and the red-violet color associated with such clouds point in that direction. Yet, the issue of a pleasant smell of incense instead of the foul odor of chlorine or sulfur remains problematic. It is particularly problematic in that incense is, by definition, a substance void of sulfur.
Some might argue that given the euphoric state of the witnesses, who were also believers, their capacity to judge smell was impaired, and they projected a more consistent religious meaning to the smell they experienced. This may be so, but there were many other people (non-believers) who would have reported something else. In fact, a smell of sulfur or chlorine might have caused a panic in the crowd. Others may invoke phantosmia (olfactory hallucination) and parosmia (distorted sense of smell), but these conditions are usually linked to head injury and respiratory infections. This explanation would require that Egypt was undergoing an epidemic of such health conditions, something that is quite improbable.
Another possibility would be that all those who reported on the Zeitoun events have censured their reports about unpleasant smell, because it would not point towards a divine event. Yet, as there are no data pointing in such direction, one has to look somewhere else.
It is clear that religious experiences are at times associated with “smell of holiness”. In the Roman Catholic world, one pays attention to “the sign of ‘sweet odor,’ a phenomenon in which the body or the tomb of a saint emits a sweet odor. In the Old Testament, a sweet-smelling odor was a metaphor used to indicate a person pleasing to God and holy in His eyes. Usually, the odor is unique and cannot be compared to any known perfume. Cardinal Lambertini posited that while a human body may not smell bad, it is highly unlikely, especially in the case of a dead body, for it to smell sweet. Therefore, any odor of sweetness would have to be induced by a supernatural power and be classified as miraculous” [11]. This is certainly a good description of what the believers in Zeitoun were thinking, even if it was not about the body of a saint. This explanation, however, is beyond rational proof.
Lastly, there is the possibility of a collectively shared clairalience psi experience (acquiring information through smell outside normal means). It would be tantamount to Warcollier’s famous studies of collective telepathic experiences through “contagion” [12]. But there is very little research on the topic beyond compilations of anecdotal accounts. So, in the end the jury is still out, but the smell of fragrance is definitely one of the anomalous dimensions of the Zeitoun events that seismic activity cannot account for.

Phosphorescent-like luminosity
Another common qualitative description was some sort of glowing aura or phosphorescent-like luminosity in the sky and around the church. Palmer reported that "the large dome atop the church is sometimes illuminated by the heavenly lights, and on one occasion, as described by Bishop Samuel, the light which poured out from beneath one of the smaller domes gradually covered the entire church in light" [13]. Michel Nil, from his 1978 interviews, was told by Ragaï Louis that he saw the church illuminated from above as if it was from a fluorescent light [14], while Victor Fakhri described the same phenomenon as a phosphorous light on the church’s wall and dome [15]. As well, witness Sami Goubran described a very strong light, as if it was “a million of watts,” emanating from the church and lightening up the entire neighbourhood [16]. Bayless was told by the witness Mona Mikhael that “another time…like the sky was open. A very, very wide kind of light. Not very radiant” [17]. 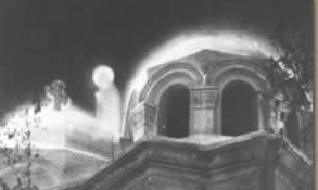 Yet again, this type of phenomenon is associated with seismic activities. Devereux noted that “streamers and aurorae-like displays across the sky, balls of light, glows in the atmosphere, sparkles of light on hillsides, ‘slow’ lightning – and occur in association with, but by no means all, earthquakes. They appear before, during and after quake activity, and sometimes at distances of tens of miles from the epicentre of such seismicity” [18].
The issue is becoming a familiar one. Indeed the witnesses’ descriptions reinforce the notion that the events of Zeitoun were enabled by seismic activity, but they can hardly explain why such luminosity was centered on the church for an extended period of time.
Scintillating lights, “stars”, and other precursors to the apparition


As it was already mentioned before, the main apparition was oftentimes preceded by sparklingly lights. As Palmer noted, "the light have been described by spectators as 'a circle of bright spotlights' on one occasion; as 'falling stars' on another occasion, and even as a 'shower of diamonds of light' swirling in the path of Our Lady's movements. A brilliant crown, all of lights, has been seen over the figure of Our Lady, giving her a majestic and glorious appearance" [19]. Zaki witnesses a similar phenomenon, as she wrote that “on my fifth night at about 4:15 a.m. I saw four yellow flashes or flames covering the front of the church. Following this about 4.30 Virgin Mary appeared ‘full figure’”[20]. She added in a different text, “again I saw a flash of yellowish-orange light shape like a big flame and covering the whole front of the church and lasting about five seconds. It was repeated twice (four times in all)…” [21]. Hilda Goubran told Michel Nil in 1978 that at the time of the apparitions there was stars and pigeons associated with the apparitions [22]. Anzy Morid  told Bayless in a 1981 interview that he saw “sparkling lights” prior to the apparition in April 1968 [23]. 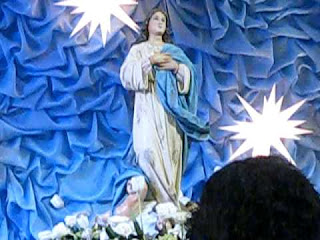 Once more, Devereux in his study of light phenomenon associated with seismic activity quotes a report from the 1872 edition of Nature that his reminiscent of Zaki’s observations: “[…] following the great earthquake shock of a Californian earthquake recent to 1872, two witnesses observed ‘sheets of flame on the rocky sides of the Inuyo Mountains’ about half a mile from the Eclipse Mines. ‘These flames, observed in several places,’ the report continue, ‘waved to and fro, apparently clear of the ground, like vast torches. They continued for only a few minutes” [24]. Further, he quote a report from a 1902 paper in Nature discussing “flickering flashes” associated with eruption of Mont Pelee [25].
There are other analogous phenomena associated with the pre-apparitional phase that could be highlighted. For instance, Therese Gadallah told Michel Nil that she saw a large red ball transforming itself into the Virgin made of white light [26], and Vivian Goubran made the same observation about a red ball [27]. The Nature article of 1902 about Mont Pelee eruption also noted a large red ball in the sky [28]. A number of witnesses also described the pre-apparition phase as being a shining column of light transforming itself into the Virgin [29]. Similarly, rays and beams of light were also noticed with seismic activities [30].