After a long and overdue return to this case, the qualitative description of the actual apparitions is discussed in this post.

General Description
One obvious aspect about the apparitions is that there was a fairly wide variety of descriptions and “behaviors” reported by the witnesses.

The apparitions seemed to have all occurred near the Church, but not necessarily at the same exact spot. As previously noted, the first one was seen on the roof near the base of the dome. It was also seen in the courtyard between trees [1], while in other occasions it was seen in mid-air above the main dome [2]. It is interesting to note that after a number of days of apparitions, the public utilities cut the power in the neighborhood, at first to deflect a hoax, and then to help having a better view, as well surrounding trees were cut on the third night so people could see better [3].
The most common colors were blue and white, but some noted also green and pink [4], and others saw a reddish light [5]. These are important elements to define the nature of the apparition, as the traditional colors associated with the Marian worship is blue and white, but also red (although more common in older and Eastern iconography). 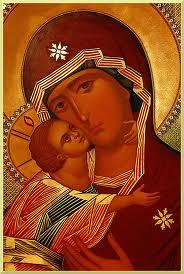 Several witnesses underlined that apparition disappeared as if it turns off slowly the dimmer of a lamp [6], while in other situations it rose in the sky to disappear [7]. In some occasions it was perceived as if the wind was blow through it and that her “veil” was moving in the wind [8], while it appeared to be flat and only 2-dimensional in another occasion [9]. At times, the apparition was motionless and described as statue like [10], but it appeared that it was moving more often than not [11] but as if floating without using “its feet” [12]. It was “making gestures” with her “head”, and her “hands” in particular [13]. 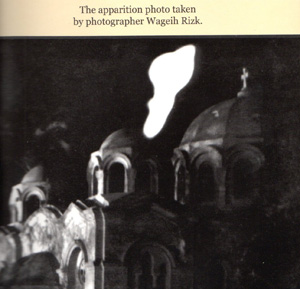 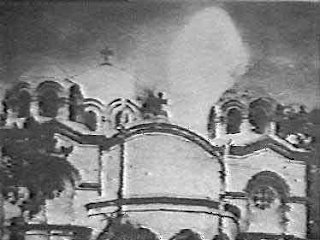 
The actual shape appeared to have also varied from something like squarish form which was construed as the Virgin sitting and holding the infant Jesus [14], while in most cases it seemed to be closer to either a vertical rectangle or a vertically elongated lozenge with a circle at the top, which sometime seen in full, and other times only in “half-figure” [15]. Many claimed to be able to distinguish a face, eyes, and mouth [16], and even resembling representations seen in religious icons [17]. Yet, others noted that there was a light but they could not distinguish anything particular [18]. 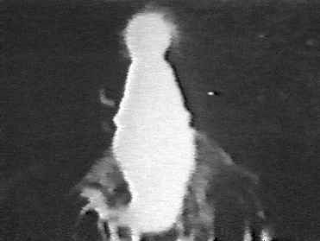 Picture found in Palmer without a source (p. 45).
Zaki could not find the source (p. 9).
As one would expect, it is normal to have variations in descriptions provided by eye-witnesses, but in general in tends to be relatively consistent. This certainly adds some degree of confidence about the common and ongoing source of the event. However, one important question remains as to whether the witnesses projected into their experience their own beliefs and interpreted the events as being an apparition of the Virgin Mary. This is a difficult question to assess properly, but there are some elements that could provide a few leads in this regard.


As discussed in a previous post, the crowd became at one point very large, certainly in the thousands of people. Witnesses’ accounts are quite interesting in their comments about other people present. There was a lot of emotional energy displayed during these events. Some noted that people were screaming at the apparition [19], and in Kamell and al.’s survey the crowd was described as either excited or hysterical (45%), and in prayerful devotion (38%) [20]. 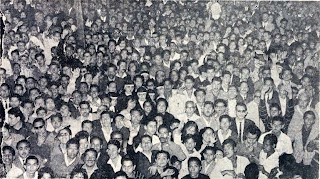 To add to the very intense atmosphere, some witnesses saw “miracles” such as paralyzed people walking and other people beyond cured on the spot [21]. This is in line with the investigation conducted by medical doctors on the behalf of the Coptic Church which found several unexplainable cases of people being cure of illnesses. About a dozen of them are described in some detail in Palmer [22].

In such an atmosphere, which mixes religious devotion and amazement, the probabilities that many people projected their belief into what they saw seem quite high. Non-believers like Nelson, as already noted, did saw an intense light, but could not translate what they saw into the “Virgin Mary”. Yet, the original witnessed were Muslim workers, and they thought that a woman was about to commit suicide by jumping from the Church’s roof.


A combination of factors can be invoked to reinforce what was discussed on this blog in previous posts about “prior plausibility structure”. Zeitoun is known in the Coptic tradition as a place where the Virgin rested during the escape to Egypt, and there is an old tree associated with this tradition in Zeitoun. Then, the apparitions were centered on a Church, dedicated to Saint Mary. There were “miracles” seen by witnesses, and there is no doubt that the word about such event spread very quickly. The main colors were blue and white, and sometimes red, the traditional colors associated with the Marian iconography. Finally, the shape of the apparition was construed even by no believers as the one of a woman. 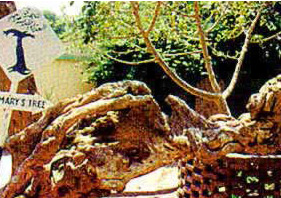 One could also think that it is an example of one seeing what one wants to see (also known as pareidolia). The social context combined with the key characteristics of the apparition could lead to make such a conclusion about pareidolia. However, if the context is certainly social in nature, pareidolia is an explanation that remains firmly in the world of individual psychology. Given the widespread assessment by witnesses that the apparition had a human shape, the pareidolia explanation is relatively weak.

However, this does not mean that no pareidolia occurred during the Zeitoun events. One case that was reported only by a few witnesses is a light construed as being the Virgin with the infant Jesus. The picture below is described as being “Real photo of the Virgin kneeling and praying, while carrying the Child Jesus Christ in Her lap. […] Photographed by Mr. Wagih Rizk at 3:15 am on Saturday, May 25, 1968” [23]. Although the picture is somewhat blurry, it seems to be a stretch of imagination to describe this as being anything specific. 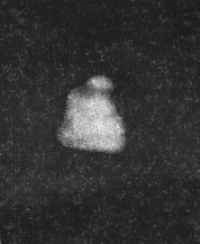 
Could the “physical evidence” help us here? Like with most UFO and paranormal-related pictures, they actually tend to murk the water more than they help, as they create controversies about what they are. The fault, unfortunately, is usually on the believers, who do not care to provide the rest of the information necessary to assess the source of the photography. A picture is not a fact; it is an artefact that has a complete social and technical context, which cannot be severed from the actual image; otherwise it becomes meaningless colors on a piece of paper. The story of Zeitoun is no different in this regard.


There is a famous picture where the “Virgin” is seen in great detail, but it is actually an enhanced picture with drawing done over it by an Egyptian doctor who witnessed of the event. This was not intended to be a hoax, but rather a “better” representation of what he saw, as noted in picture caption seen below (unfortunately I could not find the actual source of book where the picture and caption are taken from). 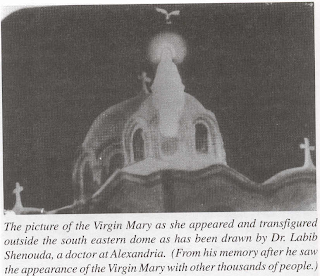 
This brought some sceptic websites to declare the picture a fraud, but in fact the original is actually genuine. The same picture is found in Palmer [24], published in 1969, so it was taken either in 1968 or 1969, by Ali Ibrahim, and one can observe that the picture is much more blurry, as noted in Kamell et al.’s photographic analysis [25]. 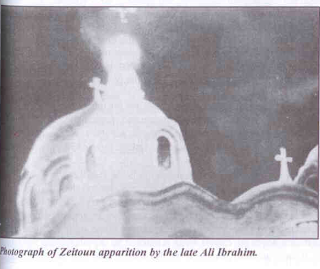 
The other picture that has created some controversies is the one taken by Fawzy Mansur sometime in 1968 [26], and was analyzed in detail by Kamell et al. They found no particular fault with the picture that would betray its authenticity, but double exposure could not be ruled out either [27]. However, its semi-transparent nature is in direct contradiction with the opaque look found in other pictures, as well as the description given by almost all eye witnesses. “Too good to be true” is probably a more sensible attitude regarding this particular picture. 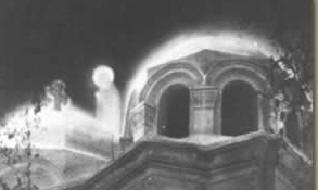 
In the end, it remains difficult to assess what people saw from the point of view of the “physical evidence”. The fact that some pictures were “improved” like the “doves”, as discussed in a previous post, and some of the apparitions does not invalidate the case. As Fodor Nandor noted many years ago about studying poltergeists, there is often a mixture of genuine anomalies and make belief, as the anomaly can awake some powerful and uncontrollable feelings inside people [28].


One other useful source of information is through comparison to similar event. The more recent event of December 2009 in Warraq, also near Cairo can help us to have a better sense of what happen.


The apparition in Warraq was much shorter in duration when compared to the ones in Zeitoun. It was covered by the Egyptian press, and there are many phonecam videos available on Youtube. The case is not without controversies either, but it was declared to be a genuine supernatural phenomenon by the Coptic Church. Without assessing whether there was any socially relevant anomaly that occurred in Warraq, what is interesting is that it provides some points of comparison to visualize what people in Zeitoun saw more than 40 years ago, as well as what kind of atmosphere was happening then. 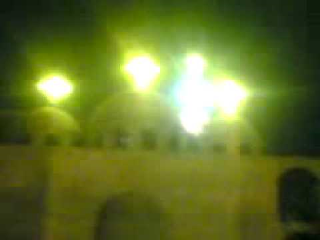 If one looks at the videos on Youtube, the images are blurry but one can easily construe what is being seen as an apparition of the Virgin. As well, the atmosphere was also intense, people shouting, singing, cars horning, etc. It was definitely a social event, even if this might be a hoax. From this perspective, it reinforces the notion that UFO and paranormal events cannot be studied solely from the point of view of individual psychology, or solely from the individual level by parapsychologists.
In light of all the factual information available on Zeitoun, it is not possible to determine the nature of the events. The geomagnetism has certainly played a role as enabling forces, but when one looks at the detail level of the apparitions there too many things lining up for geo-physics to explain everything. Those who claim that geo-physics can explain all the Zeitoun events have not enough facts to support such explanation, and it comes down to be a matter of belief. Those who see a form of divine intervention are obviously making this assessment based on their beliefs, but to stay there is to stay beyond the realm of a reasoned discussion. In order to go beyond the belief systems of the both the sceptics and the believers, a reasoned explanation needs to be attempted to shed, hopefully, some more light on this intriguing case.
Having now looked at the Zeitoun case and the available facts and information, the next post will be proposing to look at the events using the Model of Pragmatic Information developed by the parapsychologist Walter von Lucadou, which is one of the rare parapsychological analytical tools integrating the sociological dimension.