Wonders in the Sky – Book Review

This post is a review of Jacques Vallée and Chris Aubeck’s Wonders in the Sky. The full citation is:


The well-known ufologist Jacques Vallée, after a long absence from the ufological scene, published another major book with Chris Aubeck. This is an important event given the very steep decline in serious ufological research observed during the last decade. Although it is a well-researched and substantive book, with proper references (a rarity in ufological literature), it may actually be the last significant book of serious ufology; an approach that seemed to have run its course. 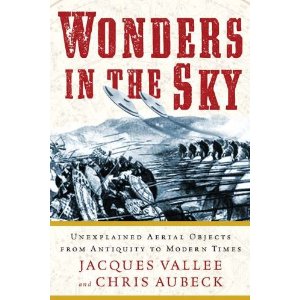 
Vallée and Aubeck, with the support of many volunteers from several countries, have gathered 500 cases of UFO-related observations that were put in writing and dating from 1460 B.C. to 1879 C.E. In each case, the exact source is provided, with at times a short discussion to explain how the original source was translated. As well, they have included about 80 cases that were considered as interesting but that were considered as hoaxes, obvious misperceptions, tall tales, or off topic because they were “religious visions”.


The introduction is essentially a discussion about the existence of the UFO phenomenon prior to the 19th century, something that Vallée and Aubeck consider as a little known fact, and a crack at Stephen Hawking who considered that only “weirdoes and cranks” report UFO sightings. The end of the book provides a short analysis about the physical trends that could be extracted out of the material gathered. For those who read Passport to Magonia, the book structure will appear familiar. There are several reproductions of ancient drawings and paintings illustrating the cases under analysis.


As Vallée and Aubeck acknowledge, some of those cases have very little information, but they offer an overall picture that the UFO phenomenon has a long history. From the point of view of providing references for further research and study, it is certainly a useful book. As well, the authors and their network of volunteers have put a lot of work and energy in making this book. They should be congratulated for that. As a reference book, it should be added to the book collection of anyone interested in UFOs.


The fallacy of inductive thinking


In spite of being a valuable reference book, Wonders in the Sky suffers from all the usual problems linked to ufology as a research endeavour. To start with the introduction, the issue of whether the UFO phenomenon predates the 19th century, and that only weirdoes see UFOs, is a rear guard battle. As Vallée and Aubeck noted, Van Daniken made the idea of ancient UFOs quite popular in the UFO buff circles since the 1970s. As well, many popular books on UFOs make at least passing references about pre-1947 UFO sightings. So, who are they trying to convince?


The issue of weirdoes has been beaten to death in ufology, and Jimmy Carter’s sighting report is a well-known argument in this story. The real discussion should not be about who report sightings, as much as who is talking about UFOs. Unfortunately, many vocal UFO buffs are indeed weirdoes and cranks, and they have deeply discredited ufology since its early days. This is an old and well-known issue. To bring Hawking in this fray does not help in any shape or fashion. Ufology books tend to be nostalgic of the days where ufologists saw themselves as pioneers of a new science, facing adversity from all fronts. This one shares this feature as well, although only moderately. The sad reality of the early 21st century is that UFO-related issues are increasingly facing indifference rather than hostility.


A more substantive problem, however, is that this book (like most UFO books) proclaims to be “fact based” (or inductive), yet it fails to realize that any fact is actually an artefact. A fact is a tiny slice of perceived reality that is transcribed in some form. Reality being way too vast for the human mind to absorb, it has to be cut down into tiny pieces about what is relevant. And this where the problem is: how to determine which piece of reality is relevant. In the end, what is a fact comes down to conceptual and methodological choices about what is relevant. Different choices will bring different “facts”. Hence a fact is indeed an artefact of human decision-making. In other words, a fact-based or inductive approach will never be purely objective because it is contingent on decisions made about what is relevant.


Wonders in the Sky, contrary to many UFO books, at least provides some discussions about how the authors came to select or reject the cases they have. The criteria, however, are for the most part the typical ones found in ufology: objective physical phenomenon, reliability of the witness/source, lack of motive to make up a story, etc.


The real criteria are actually not discussed directly. The introduction, like Vallée did in most of his previous books, does not state directly his conceptual framework informing his methodological choices. It is left ambiguous. Yet, if one reads carefully between the lines (and has read read his previous books), his framework is that the truly anomalous UFOs are effects produced by some sort of psycho-social-physical technology emanating from some sort of intelligence. Once this conceptual decision is taken, then a number of fact selection criteria are put in place. First, only cases that seem to have an anomalous physical dimension are included, which in turns excludes for instance synchronistic subjective events that might be UFO-related. Second, the necessity of having a “technology” of some sort involved implies that somehow flying objects are a discrete category to be separated from other anomalous events such as sea monsters, or hauntings. Lastly, the decision of involving a foreign form of intelligence then precludes the possibility of including “self-referential” anomalous events such as “religious visions”.


Jacques Vallée has long complained that he was the only one not knowing what UFOs are. That may be so, but he, like any other UFO researchers (using the extra-terrestrial hypothesis or not), needs some sort of deductive hypothesis or framework to determine which slice of reality is deemed relevant. Good and sound scientific research is expected to present and justify these deductive assumptions in a clear and explicit manner. After all those years, I still do not understand why Vallée feels the need to hide behind the fallaciousness of inductive thinking.


Did ufology’s yardstick was moved ahead?


The authors declare that their research as led them to four major conclusions: (1) anomalous aerial phenomena had a major impact on witnesses; (2) each epoch has projected its own worldviews into the interpretation of these phenomena; (3) they have impacted human civilization in important ways; and (4) older cases can inform contemporary research. Unfortunately, the analysis in the Conclusion chapter does not demonstrate those findings, except for the no. 4. The reader is called upon to figure out him/herself how Vallée and Aubeck came to such conclusions.


The majority of the cases presented in the book are essentially unexplainable oddities reported by various people throughout time. In some case, it may have had a major impact on the witness (like religious conversion), but in most cases it was just an odd thing. Hence, conclusion no. 1 is not warranted with the material presented. I suspect that this finding is simply an import from the authors’ research on contemporary UFO experiencers (which again can be open to discussion as how widespread this finding is). With very few exceptions, the conclusion no. 3 is absolutely not demonstrated in the book, and certainly no serious sociological analysis is provided to substantiate it. This one is clear import from Vallée’s non-avowed conceptual framework, and from that point of view it is no different from “inductive” ETH ufologists who see extra-terrestrials everywhere. Finally, conclusion no. 2 is certainly sound, but the book implies rather than demonstrating it (as well, this is no big news).


In the end, it is possible to say that this book is interesting but failed to provide ufology a desperately needed fresh start. It might not have been the intent of the book, but clearly ufology is getting in a bigger “mess”, as Vallée is keenly aware.  The greatest opportunity missed by this book is that by looking into pre-modern eras the authors could have really set aside their unfortunate and implicit notion of technology to understand UFOs, and started to look into ancient anomalies as simply human events. As well, as Vallée has been aware for quite a long time, ufology and parapsychology would greatly benefit from talking to each other; this would have been a golden opportunity to do so.


Jacques Vallée is in my opinion the best researcher in the world of ufology. In this second decade of the 21st century, he also appears to be one of the last remaining few serious ufologists. He published probably what is to be his last major book, in an atmosphere now much less contaminated by the moronic Roswell/Majestic hysteria. Unfortunately, not even the greatest ufologist can save ufology from itself.
Posted by Eric Ouellet at 10:40 AM 2 comments: