This post is another review of a relatively new book, written by journalist Steve Volk on the paranormal and his experience of it. The full notice is:


The majority of people who became interested in the paranormal may have started out of curiosity, but in the end, most of them are consciously, or not, engaging in some sort of spiritual quest. They try to make sense of themselves, others, their lives, the world, and their place in the world. This book is very much a reflection of this common path, but contrary to many books on the same topic it is very informative and well-balanced. I certainly recommend this book to anyone who is looking for a sound and fair introduction to the paranormal. 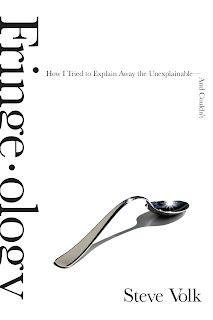 
Steve Volk’s book covers a number of topics related to the paranormal such as near-death experience, psi and remote viewing, consciousness and alternate perceptions of reality, UFOs, ghosts, prayer and meditation, and lucid dreaming. The main thread in the book is Volk’s quest for better understanding the paranormal, and particularly his own experience of living in a house “with a ghost”. The book is written for the larger public, where there are many personal descriptions of his encounters, discussions and interviews with key researchers in the broader field of the paranormal. Yet, along those descriptions, Volk introduces the reader to the main issues and challenges linked to a particular aspect of the paranormal, in a plain but informed language. Furthermore, the book has also at the end a list of sources for each chapter, with many of the key texts on the topic, showing that he did his homework.


The main message of the book is that when it comes to understanding the paranormal, a middle-of-the-road approach is the only one that is really helpful. In numerous occasions, Volk presents the views of the “extremists”, namely the reductionists and materialists’ view where there is nothing paranormal and the New Age view where anything is accepted uncritically as paranormal. Both ways lead to dead-ends. The reductionists miss important and well-documented evidence, and more importantly miss how relevant the paranormal might be in the life of many people. The New Agers, on the other hand, will construct views of life and the world that have little connections to reality, and where scammers of all shapes and colors can exploit people without any shame.


It is also interesting to read that the paranormal can be presented as something helpful and useful, not just a mere curiosity. People who experience near-death experience are oftentimes transformed for the rest of their life; people who practice meditation and prayer do find improvement in their life; lucid dreaming can indeed help people with serious psychological wounds such as PTSD, etc. Yet, Volk remains in the middle-of-the-road with these issues too. Maybe it is purely psychosomatic, maybe there is something else, but there is no way to know for sure. In such a situation where something does work but it is not understood, all we can do is to keep an open mind and try to understand. As Volk wrote, he wishes that the war between the “extremists” be over, so that we can study the paranormal free of the belief systems of both the debunkers and the New Agers, and yet in a way that is rigorous. I certainly share the same wish.


The chapter on UFOs is, unfortunately, weaker that the other ones. It is based essentially on Volk’s research and interviews with people involved in the Stephenville UFO incidents of 2008. Although the description of the events is informative and balanced, the main thrust is not really about UFOs, but about how a community came to interpret an unusual event as being either truly extraordinary or a misunderstanding. Volk shows well how the believers, the MUFON investigators and the debunking journalists, polarized the situation in a way where a middle-of-the-road approach could not really emerged. In the end, an informal truce was declared within Stephenville where people are “allowed” to accept either interpretation. This chapter certainly illustrates that paranormal events are also social constructions, and whether something is “declared” paranormal or prosaic is more dependent on social dynamics than on the actual evidence. The same analysis could have been done on a famous haunting story, which would be more in line with the other chapters of the book. So the UFO chapter, although not bad, is bit off topic.


The book concludes, in essence, that the paranormal is indeed a fringe aspect of reality, difficult to measure (most often not even measurable) but “real” enough to not go away. People can make the paranormal whatever they want because there are no ways to determine for sure what it is all about. In other words, it is a liminal phenomenon, stuck in between reality and fiction. If people can make the paranormal what they want, then why not making it into something useful, helpful and meaningful (without having to pay tons of money to a “guru” or a scammer to know how you should go about it). This is common sense, but when it comes to the paranormal, words of common sense need to be repeated often and loudly.


Overall, it is a well-written and well-research book on some aspects of the paranormal. It is written in a way that will please most readers, and keep them interested through the 321 pages. The author’s resolute stand for a middle-of-the-road approach is refreshing and much needed.  I would not be surprise if this book is transformed into a television documentary about a journalist’s quest to understand the paranormal.
Posted by Eric Ouellet at 12:18 PM No comments: