On 2 April 1968 around 8:30 pm, a group of Muslim workers at a local public transit garage in a Northern suburb of Cairo known as El-Zeitoun noticed a woman on the top of St. Mary Coptic Church across the street. She appeared to be dressed in white, and they thought she was a nun (Brune, 2004: 7).They thought that she was about to commit suicide, and shouted at her to not jump. Nothing happened. Then, a few moments later a number of women who were walking in the street also noted the woman on the top of the Church, and one of them loudly exclaimed in Arabic that it was “Our Lady” (i.e. the Virgin Mary). At this time, one person ran to contact the emergency services while another one went to get the priest in charge of St. Mary Church, Father Youssef Ibrahim. There was now a crowd gathering in the street, enough to block traffic. But before the emergency services or the priest were able to see the “lady”, it disappeared. All this commotion lasted only a few minutes (Zaki, 1977: 4-5), but according to other accounts there was a second apparition around 3:00 am the same night (Brune, 2004, 7). What unfolded in the weeks and months to come became known as the Zeitoun Marian apparitions, eventually witnessed by thousands of people and leading to a formal recognition by the Coptic Church authorities of a true apparition.

Marian apparitions, or more accurately anomalistic events interpreted as Marian apparitions, are neither a new nor a marginal phenomenon. From the Fourth century to the present, there have been over 21,000 recorded Marian apparitions, and more than 200 of those occurred in the 20th century (Horsfall, 2000: 375-376). Some of them can be qualified without a doubt as a “social events” given the number of witnesses, and the amount of press coverage received. In particular, let’s note the events in Fatima, Portugal, in 1917; Garabandal, Spain, in 1961; Medjugorje, Former Yougoslavia, 1981; and Lubbock, USA (Texas), in 1988. This type of events, irrespective of how they interpreted, fit well the notion of Socially Relevant Anomalies (SRA) [1]. Then, we can ask ourselves if Marian apparitions could be studied as expressions of social psi effects?


To answer this question, this article proposes a case study of the Zeitoun apparitions and proposes a parasociological analysis, similar to the analysis done of UFO waves, to assess whether the notion of social psi could be a useful one to look into SRA of the Marian type. First, an overall description of events and an assessment of their anomalistic nature are proposed. Then, the events are analyzed using the Model of Pragmatic Information to assess if the general notion psi can inform the unfolding of events. Finally, a parasociological analysis is done based on the five basic methodological criteria described in a previous post.

Posted by Eric Ouellet at 4:50 PM No comments:

A shorter French version of the 1952 UFO case study, using von Lucadou’s MPI to analyze the data, has been published in the peer-reviewed journal Bulletin Métapsychique of the Associatation Métapsychique Internationale (AMI), France’s main parapsychological organization. The notice is: 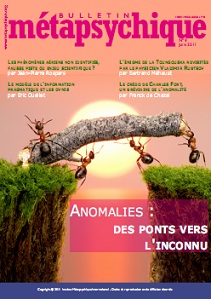 It can be found here : AMI site

It will be available soon on: Informit


P.S. These journals own the copyrights on these articles, as it is the norm with academic journals. So, even if you order a copy, I do not get any royalty.
Posted by Eric Ouellet at 11:46 AM No comments: