This post is proposing a tentative model to explain social psi effects based on the literature surveyed up to this point, and some afterthought emerging out of the historical case studies presented here. The model is presented as a “circuit” because there is an apparent recurrent component to psi effects.

There is one challenge linked to parasociology in general, and UFO studies in particular, that needs to be highlighted. Knowledge is usually produced by alternating between induction and deduction, or by observation and conceptualization. New data are required to validate or modify concepts and models which are necessary if one is to produce more than mere description (i.e., producing an explanation). Concepts and models are required to assess which data are relevant, as data about the entire reality cannot be collected without being quickly overwhelmed (i.e., distinguishing between the signal and the noise). Overtime, there is a synergy between more accurate observations and better conceptualization, ultimately leading to better explanations. This is the ideal model of scientific knowledge production.

The reality, however, is that there are cultural preferences within the Western world about induction and deduction. Namely, in the English-speaking world there is a clear preference for induction (i.e., the portion starting from observation and moving very slowly towards conceptualization). People who are from cultures that are linked to those of continental Europe (France, Germany, Italy, Spain, etc.) tend to have a preference for deduction (i.e., it is more important to spend energy to have good concepts so that most of the noise is removed when it is time to observe). Deduction also means to adapt existing concepts developed and tested for comparable problems so that one avoids re-inventing the wheel. For those who are familiar with philosophy of science, it is illustrated by the David Hume versus René Descartes fault line, which has been at the source of many misunderstandings. In the end, however, both induction and deduction are needed to make sense of the world around us.

This brings us to UFO studies. In the United States, most of UFO research is very much influenced by the cultural preference for induction, sometimes taking the shape of a militant ideology. The problem of such approach is that one is at serious risks of never moving beyond description, and so never reaching a sound explanation. This problem is even further compounded if one relies on the highly speculative notion of extra-terrestrial visitations for an explanation, over which “visitations” we have no control anyway. Hence, induction would be at the mercy of somebody else’s incomprehensible idiosyncratic wishes.

Parasociology, as discussed here, is very much influenced by a preference for deduction. This may cause “cognitive dissonance” to many interested in UFOs. But this choice for a more deductive approach is not just a cultural preference. Since the late 1940s, there have been a lot of observations and reports about UFOs, probably in the hundreds of thousands. Although the quality of such observations varies considerably, it is fair to say that there is a very healthy amount of good reports out there. But the question that everyone should ask is: what kind of serious conceptualization did occur to further refine observations since? Unfortunately, the answer is not a whole lot. More observations of the same are not what is needed at this point, as it cannot bring a qualitatively different type of data. This can only serve to reinforce the present situation where many have given up and essentially camped on the position saying “what else could it be but ETs?,” and then waiting for ET to show up and or the government to “reveal everything” (assuming they really know something worth of mention). In other words, ufology is stuck, and it has been stuck for quite a while. A major dose of serious deductive work, as described above, is now required before engaging in further observations. It is how I interpret Jacques Vallée’s point stated in a 2006 interview:

“SR: What are your thoughts on the state of ufology in 2006?

JV: It’s a mess. There is valuable research going on, but it is carried out by individuals working with almost no financial or logistical resources. The few scientists who are still actively involved are forming a new version of the old “Invisible College,” communicating privately to stay away from the sensationalism that has taken over the field. As for what remains of the organized groups, they are not playing the role of disseminating information, conducting field research or encouraging critique and open debate. They are little more than lobbies for a particular point of view. This is a pity, because periods of low UFO activity like the current one present the best opportunity to do quiet research. By centering the whole discussion of the phenomenon on highly-charged, but poorly-researched issues like Roswell and abductions, ufologists have lost credibility, alienated the scientific public and opened the floodgates to hundreds of Internet sites where the wildest rumours circulate. No wonder serious researchers are going underground!”[1]

Parasociology is dedicated at getting UFO and paranormal research out of the underground, but ufology has to be ready for a new type of research. Once again, let’s emphasize that deductive work is not based on pure speculation, as most inductive-thinking people tend to believe. It is based on borrowing and adapting research on what is known about other realities that share similar characteristics to what is to be studied. This way we can move from the known and go towards the unknown, and avoid re-inventing the wheel, whenever possible. The most difficult part of all this, however, is that when “similar characteristics” are compared, it is not necessarily at the observation level, i.e., on the superficial level. It is oftentimes at the deep or “structural” level where the similarities can be found, and this requires a fair bit of lateral thinking. A simple example is the physics of weather. On the surface, snow, drizzle, fog, wind and drought have little superficial resemblance, but it is the same physics that explains them all at the deep structural level. Parasociology approaches the UFO phenomenon with the same spirit that weather physicists are approaching climate issues, (and I would say that climate issues are as controversial as UFO research...).

So, the following model should be seen as an attempt to synthesize existing knowledge established in a number of various fields where there are structural similarities with paranormal phenomena, UFO included. As well, this model should also be seen as a step towards better identifying the signal from the noise, to be verified in future empirical research. Hence, deduction, like induction, should not be an end in itself. We need both.

The proposed model is based on research and observation conducted by a number of serious researchers, and is trying to move from the known in order to move towards the unknown. Without repeating the content of all previous posts dealing with reviewing the literature on the nexus paranormal-UFO phenomena, it is important to highlight what is known.

Jacques Vallée’s research is well-known in ufology. He found that many witnesses had paranormal experience before, during and after a sighting. Furthermore, the narrative structure of encounter with what has been construed as non-human entities shares a lot of similarities with folkloric myths. John Keel, coming from a different angle, considered that UFO phenomena are difficult to distinguish from other paranormal phenomena, and that it is probably wiser to see them as part of continuum rather than being discreet realities. The younger Jerome Clark provides also an interesting overview of the observational similarities between UFOs and paranormal phenomena. On the other side of the Atlantic, John Spencer and Albert Budden also found many similarities between the two, confirming empirically the findings of Vallée and Keel. Jenny Randles is famous for her concept of “Oz Factor”, which is essentially about altered states of consciousness (ASC) found in many UFO events. According to many parapsychologists, ASC is considered a key psychological state in psi events. A few parapsychologists, in particular Scott Rogo and Manfred Cassirer also ventured in the UFO territory and found extensive similarities. French authors François Favre, Bertrand Méheust, and Pierre Viéroudy coming from very different directions also found that “paranormality” is at the centre of the UFO experience, also confirming findings by researchers in the United States and the United Kingdom. There are a number of other less known researchers who came to similar conclusions, also based on empirical research.

The fact that the few researchers who cared to explore the paranormal-UFO nexus found so many similarities shows that it cannot be ascribed to coincidence or wishful thinking. There is a serious empirical base behind their assertions. Ignoring it is simply moving away from scientific work.

Many of the above researchers could not help but also notice that there is a social dimension to the paranormal side of the UFO experience. Once again, Vallée was deeply impressed at how the UFO phenomenon changed the life of so many people in such a deep way, and that many appeared to gain psychic abilities. The younger Jerome Clark was one of the first to push for an exploration of the social unconscious and the UFO phenomenon, as there are clearly “social constructions” embedded in the UFO experience that closely intertwined with the paranormal dimension. Randles, through her research, reinforced the notion that the apparent technology perceived in UFO tend to be just a few years ahead of technological progress on Earth, and therefore social representations seem to play a key role in the experience. Méheust provided the most serious analysis to date about the intimate link between social representation (i.e., science fiction) and UFOs. Viéroudy found a number of strong correlations between major social events and UFO waves. On the social dimension too, there are other lesser known researchers who came with similar findings.

The weaker link in this case is from parapsychology that has not spent much energy trying to understand the social dimension of psi. The notable exceptions are the small group experiments conducted by Batcheldor, Owen and Sparrow, and the Globe Consciousness Project. This last research effort has been described by leading parapsychologist Dean Radin in Entangled Minds as a first step in investigating “social psi.” However, it is fair to say that parapsychology has been able to show that there is enough evidence to seriously consider that psi effects is likely to occur at different levels: individual, small group, and large group.

In light of the above research about both the paranormal-UFO nexus, and social dimension of UFO and paranormal events, it appears clear that ufology would benefit from investigating in more depth how its social dimension intersects with the paranormal one. In other words, ufology, parapsychology and sociology should join forces, as existing research points towards an unexplored research potential to uncover. The question is then how to go about it? It is where a trans-disciplinary model becomes useful and critical to generate research hypotheses.

Below is the model’s graphic representation, which will be explained at length in the next post. However, let’s note that it is integrating the previously presented PEMIE model, which also take stocks of what is known about the materiality of UFOs. 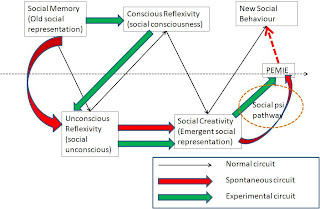 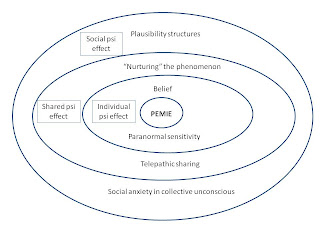